[Warhammer 4] The Adventures so Far, part I

What follows is a brief recap of the adventures my Wednesday online group has had so far, both to regale you fine readers and to keep track of plot threads and important developments. I always forget what interesting items I’ve handed out, so hopefully this will be useful for that as well. I’ve never had a proper campaign log so far, so this will be a first. This campaign is set in my version of Warhammer’s Bretonnia, a land of cruel noble oppression of downtrodden and palsied peasantry and magical chivalry. I set it here because I like proper feudalism better than the full-on early modern feel of the Empire, with its relative “equality,” and it scratches the Game of Thrones itch. I’ll probably post more later about my setting information.

First Adventure: Castle Greemly
[System note: For the first adventures, I used a homebrew version of Lamentation of the Flame Princess rpg, which is basically “Basic” 1980s-‘90s D&D. It had a lot of Warhammer elements, uses levelless spells, but is otherwise very D&D. I started the PCs at level 3. One important rule is Deathblows for Fighters, which is a free attack on an adjacent enemy after you kill one. This is also in Warhammer, but for all characters! Yay!] Regis had a prior contact with Lady Griselda Sangraine, a noble enchantress and head of her family. Regis had obtained a small magickal stone for Lady Griselda, and his success and discretion led Lady Griselda to entrust him with another sensitive task. [I ran a modified Oldenhaller Contract adventure, google it.] She believed one of her vassals, Lord Greemly, was cavorting with dangerous and fell magicks, due to rumors she had heard of strange sights and beastmen on his estates and his absence from court. She tasked Regis with visiting Greemly and taking his spellbook. Regis found Jarlyle the Bard and Boneshard in port city tavern and recruited them to join the adventure. A dwarf named Jarlyle joined soon thereafter.

Traveling to Greemly’s lands in the Forest of Chalons, the adventurers came across a recently fought battlefield. They heard approaching riders, and were confronted near the field with a knight and his hobilar outriders, who demanded their goods after learning they were not fellow vassals of the great Lord Enguerrand. The riders charged in, Boneshard was wounded by the knight’s lance, but soon hacked off his leg and the group defeated the other riders. 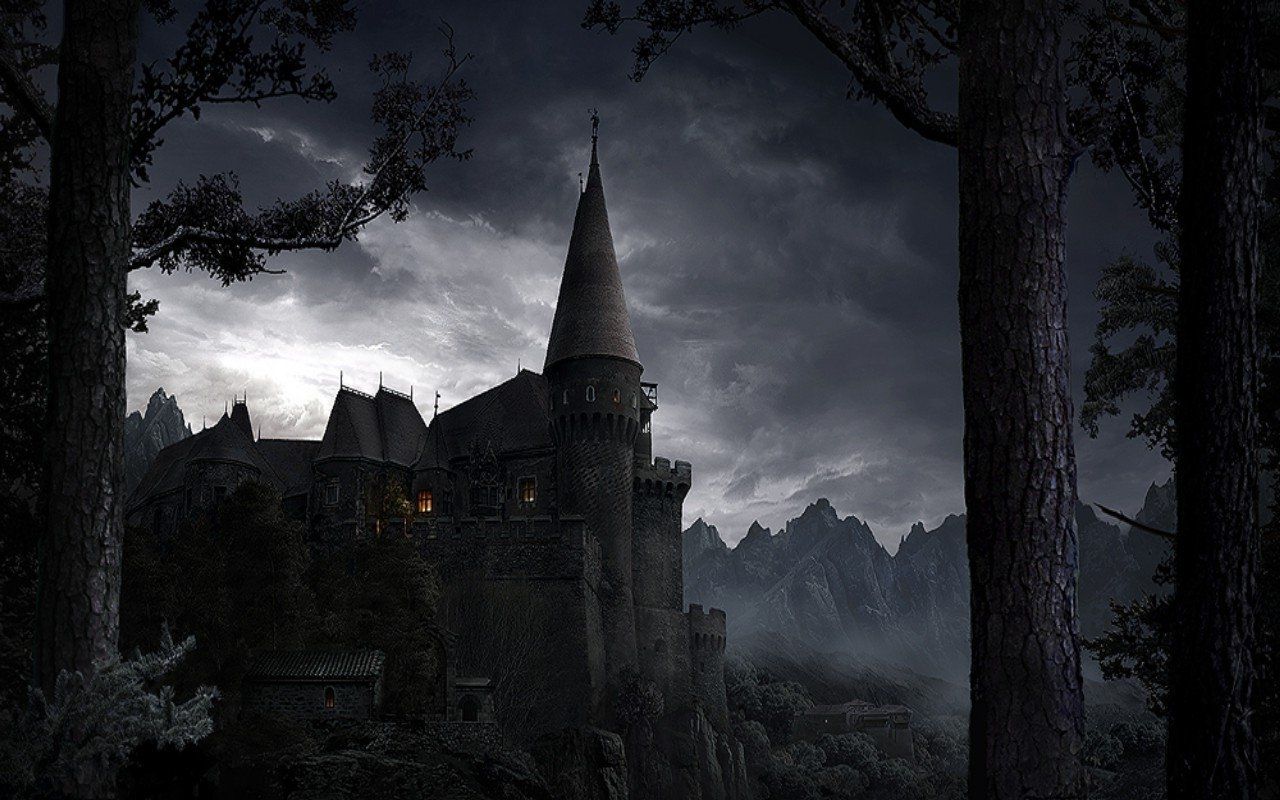 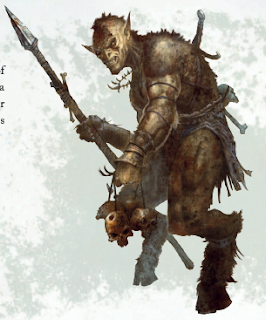 Next the group approached Castle Greemly through the forest, and was ambushed by beastmen, mostly goatmen (ungors). After butchering the attackers, Boneshard to his delight learned that the goatmen dicks contain bones and made a gory necklace. He would gather over 20 such dickbones for his necklace over the course of the adventure.

Arriving at the castle village, the group drank ale and Jarlyle played songs. They learned Lord Greemly was a kind lord who let them hunt in his forest and generally supported rather than oppressed them. 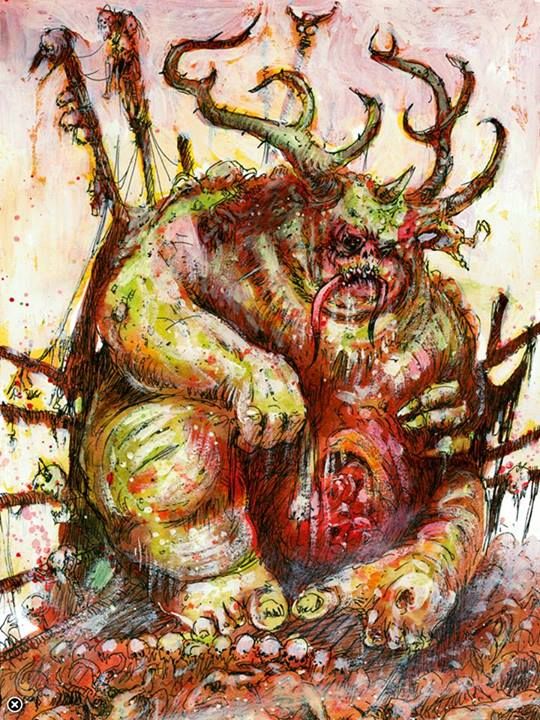 The group then headed to the castle, found the main barricade torn aside, went through a door covered in a giant chaos star around a chaotic ram’s head, found a magical talking amulet named Theodoric that they rejected, and proceeded to fight several groups of beastmen. They slew a shaman and touched a statue that proceeded to scream their presence. All in all, many goatmen dicks were collected and alarms set off. Eventually, they found Lord Greemly himself who was cut down before he could parley but after he attempted to defend himself with a chocking deadly miasmic cloud (cloudkill). Sadly for him, none of the PCs were felled by his spell and he was butchered and his spellbook taken. A giant plague demon he had summoned soon fell upon the characters, and it was dispatched as well with the dwarf suffering a few maggot-ridden wounds.

The group slept in Greemly’s chambers to recover, and then started to explore more deeply, but after nearly being killed by a minotaur, decided to leave. They were tracked down in the woods outside the castle by more goatmen, killed them but were wounded and low on supplies. Jarlyle went back to the village for more arrows, sneaking in, and saw the beastmen had run amok from the castle and butchered, ate the villagers. Two minotaurs were sleeping off their feast.

The group hightailed it back to Sangraine Castle, seat of Lady Griselda, and delivered the news.

Email ThisBlogThis!Share to TwitterShare to FacebookShare to Pinterest
Labels: WFRP