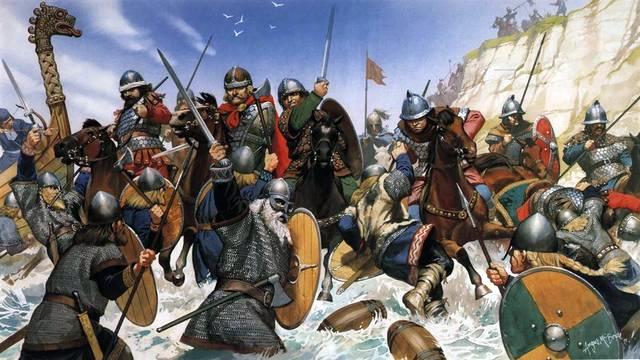 So, because Google Plus may not be the totally best format for something as beautifully engineered as Pendragon, especially when players have no familiarity with Pendragon before, I have come up with this little idea for another D&D. I want to want to DM something sword and sorcery like D&D Egypt-Athas, but I'm also not totally feeling it. Vikings and chainmail and raiding parties on the other hand, well, that's the shit for D&D, and especially appeals to me. So I bring you: D&D 1000 AD!!

I figure I'll set it in Normandy proper, because the Dukes there are Christian converts but related to all the Viking kings, with recently settled vikings forming most of the rulers. So, I figure I'll have some old ruins, pagan issues, and rivalries between the various kings. Also, it provides an opportunity for the PCs to be mercenaries in both Normandy and elsewhere if they choose. The idea is to be historical based, but with to max out the action adventure. Monsters and overt magic will exist in "mythic areas" like forests, old ruins, and coasts.

Character Creation rules - as Adventurer Conqueror King, with these differences:


Combat
Combat rules are as normal in ACKS, with the option of adding Critical Hits. More on this to come.
No comments: