The Kings in the North


The main mannish kingdom in the north is the North Kingdom, ruled from Kingstower (Bran-Mindas). But the old king, Heidrek, has grown feeble and a war of succession has broken out between his three sons after a plague swept through the land.

The eldest son King Robert (formerly Prince) rules Kingstower and all the nearby lands, as pictured on the map in red. He has allied with King Shotey and the companions of Khazad Dum in his fight against his other brothers. King Robert's wife Griselda was healed by the companions when they brought back an herbal cure from the elves of Telrast. King Robert is proud, but he is in difficulties: his army was defeated trying to cross the Blue River near Riverhome and he has lost all the lands west of the river. Only his castle as Stoneford protects his dominions, and Hurin's raiders sometimes slip through on the coast. He also was initially suspicious of the companions as they took his ailing father King Heidrek from his castle, when they believed Heidrek had been wrongly imprisoned there.


The second son is Prince Tancred, who the companions brought the aged King Heidrek to until they learned of their mistake and Tancred's sorcery. Prince Tancred tried to have the companions imprisoned after the failed to pledge loyalty to him, but the companions slaughtered the warriors he sent to capture them and escaped after stealing a Seeing Stone from Tancred's keep. Prince Tancred retaliated by beheading Heidrek's loyal old seneshal and herald "Pigeon" (Hanulf), whom the companions had befriended, and sending the head to Shotey in a box. This act led Shotey and the companions to ally with King Robert to make war on Tancred.  Prince Tancred rules the towns in purple, and he has reportedly welcomed a host of orcs from the north to serve him. In Reedhollow, the companions killed the lord of the town (and his lady wife) to free the halflings there from his, according to the halflings, misrule and tyranny. They left Reedhollow in the keeping of its new Mayor, Butterbottoms, and Prudence Noaks has been declared the "Savior of the Town."  The banner of Prince Tancred is a raven.

The third son is Hurin, who is only 16 years old. He has the loyalty of all of the keeps in orange nominally, but it is widely rumored he is a creature of King Ragnar, whose hall he was sent to as a ward in the peace treaty between King Heidrek and Ragnar years ago (Ragnar's son at Heidrek's halls died of the plague). King Ragnar rules from Dunhill and his Castle Danorith and controls the halls in black. To defeat Robert, Ragnar and Hurin hired Variag mercenaries from the Great Plains to the south. Sure enough, their combined forces badly defeated Prince Robert's armies at Riverhome. Due to his hatred of the Variags who defeated him and partially to cut off the head of the snake, Robert asked the companions to kill their Khan as part of his alliance with Shotey. The companions have now learned the Khan is encamped near the Redhorn, one of the tallest peaks in the Stonecrowns.

Finally, there are the elves. Their numbers are faded after their endless wars against the orcs and the Dark Lord north of the Stonecrowns, but they are wise and strong. Their leader is Prince Araval of Telrast, a high tower looking over the bay.

North Kingdoms: the Search for Shotey

After the death of Shotey, the companions gathered his body in Nymeria's raven cloak and set forth to find the Witch of Oakrest who had sent them to kill the ancient spider, Goliant. Perhaps they reasoned, they could ask her to bring back his spirit from across the Veil. After they departed the spiders lair, gathering the previous gemstones they found there, they met the Old Man of the Wood sitting atop his evacuated horse. He demanded gifts for the affront of not paying him homage when the companions entered the forest, and he lecherously looked upon Nymeria. The companions agreed but asked if he could use his powers to bring back Shotey. He warned them of the dangers of piercing the veil between life and death, but agreed. The companions set out south through the forest to the Sarneth Marshes for a Moon Lily blossom needed for the Old Mans ritual. They stopped at Broadheath to buy supplies but quickly discovered the tale of how they slew the lord of Oakrest had spread through the lands on the lips of the bard they encountered in Oakrest at the feast hall. The companions fled Broadheath and plunged into the swamp.

Evading the will o the wisps through clever use of magic spells, the companions returned in time with the moon lily and Shotey was reborn, though with visions of an Balrog's smoke-breathing face before his eyes.


After the resurrection the companions left the Bleakwood and headed back to Oakrest, which they found burned to ashes.  They searched for the Witch, but she was gone from her house and her animal familiar suspected captured. The companions returned to Oakrest to search for scraps of metal to constitute some armor for the dwarf king, they fell upon a band of drunken Variags in the night. The companions moved into to attack...

During the battle against the ancient and terrible spider Goliant, dwarf King Shotey valiantly faced off against the spider in single combat, hacking at it from below. In a serious of critical blows from the beasts terrible fangs, dripping with the most potent venom in the north, however, Shotey was slain and Goliant's mandibles rended him into pieces. The other companions tricked Goliant into staying emerged from his lair with clever spell use, and then slew the ancient foe in vengeance. Much experience and valuable gemstones were gained, but at the loss of the mightiest dwarf in all the north. The companions vowed to see the witch of Oakrest about a resurrection, or at least give Shotey a proper burial. Companions present:
King Shotey the Second of his name
Nymeria
Davon Thornwood the Drunk Druid
Pru (briefly at the end, someone remembered to play her)
Mayvis the catman
Sir Bloodaxe Magistus (and his squire and squires horse)
Bowie Glitterboots
Hazad the merciless
Ellazon the wise

Rewards:
1600-1700 xp each
4 diamonds from Goliant's eyes
4 emeralds
8 precious sapphires
A horn, banded in gold, known to deafen and frighten the weak willed
A old sword, carved with cirith runes

The problem I've noticed with my hands off style and seat of my pants DMing is that the players lose track of all the campaign details and plotlines I put out there. Players normally can't even track the 1-3 major NPCs they interact with, but they do remember their enemies or random friends (some street urchin, Dr. Sir Bubblesworth, the Squirrel, Esq.).

So I've resurrected this blog so I have somewhere to put the session recaps for my offline, ongoing basic d&d campaign. There's a ton of PCs (like 8) and plot hook stuff has also been getting lost, so I'm going to try and post on the regular. It's the same campaign that started with a modified Caves of Chaos and half-brewed ruleset from 2013, and by far the longest running d&d I've ever done.

A blog seems like it'd be also convenient for posting house rules and other resources (I'm planning some spell list posts), probably some setting description resources so the players can actually remember things. I've got an ambition of putting up a review of some rpg stuff I buy too. I'd like to do some rule theorizing as well, but we'll see.

Expect a flurry of background resources and setting info, hopefully with regularly updated session recaps (to keep me honest) to follow and keep the blog alive.

Into the Bleakwood: Session Recap 3 The companions entered the Bleakwood to hunt the ancient spider, abandoning for the time being their broader quest to kill the Khan of the Variags for their ally King Robert.

Entering the wood, they learned of an oppressive spirit that had been spotted: the Old Man of the Bleakwood. He had been sighted with bear companions, riding an emaciated horse, and palpable gloom came with him, according to all who had seen him.

After many days journey, the companions scouted out the lair of the ancient spider: a giant woodfall with many bewebbed trunks, dark and foreboding.

They then attacked with fire and tangles against the spider, entrapping it with entangling spells. The ancient spider's hunting spider-companion also beset the heroes. Battle was joined, stabbing and webbing! After emerging from their encounter with the spider's of the forest, the companions entered the town of Oakrest. 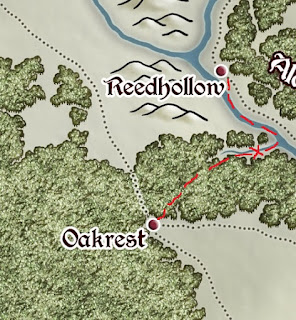 At first their way was barred by a guardsman, who was killed for asking for a bribe. (Right, I think so? He may have just been bribed...). The companions tried to buy provisions but the wary townsfolk would not sell without the lord's permission. So they entered the hall and were greeted with a feast. Among the men of the lord's hall, were several Variag barbarian horsemen who shared their fermented horse drink with Davin the Drunk, a druidic type. The companions talked with the Variags and the minstril and told tales of their bravery and dragon-slaying in the past. They also meet with the witch of Oakrest, who offered a task for Nymeria and the companions: slay the ancient spider, broodmother of the spider's they encountered in the past, and she would reward them. She gave some poison antidotes to them and a healing balm.

The lord then offered them a place to sleep at night. He then betrayed them in the room where they slept, but the companions made short work of him and his guards, killing several. They then departed into the Bleakwood.
No comments:

(debating whether obsidian portal or a simple blog is better)


After freeing the hobbit village of Reedhollow from the harsh and exploitative rule of Lord Brythnoth, the companions set out to cross the Blue River (River Lunnuin) to travel west towards their target: killing the Khan of Variags for their ally Prince Robert.

Before leaving, Pru was bestowed with the title of “Protector of Reedhollow” by the new Mayor, former resistance leader, Mr. Butterbottom. Many young hobbits look up to Prue the Dragonslayer now, and oaths of friendship were sent all around. The former lord’s son and wife were sent packing to seek refuge from Prince Tancred Tancred the Wise, but Hazad the merciless sent an arrow through the Lady Lord’s chest, killing her as she, her son, and her handmaidens departed.

Upon crossing the river, a River Maiden appeared and as the companions covered their ears, the river began rushing southward, almost capsizing the boats. The companions stablized the boats but were washed roughly ashore in a spider’s den. An ancient behemoth of a spider and its broodspawn set upon the companions, but they drove it back with fire and swords. The companions have now emerged from the spiderswood to find themselves on the outskirts of the town of Oakrest, a stop along the Kingsroad through this part of the Bleakwood.