A tale of adventure and death in the caves

A play report from my Middle-Earth campaign, by one of the players, of Pru the Hobbit:

The Wizards along with their animals, pony and cat, stayed in town while we trekked to the caves. Armidia was feeling restless, and thirsty for Orc Blood as usual. Shotey was drunk.

We decided to continue sweeping the caves on the left. The first beings we encountered were goblins. Luck was not in the hobbit's favor, and Prudence was of little help. Armidia, Shotey, Elidon, Gilliad massacred most those goblins and Armidia added some teeth to her ever growing collection.

As we walked further into the cave, Shotey was able to use his "stone sense" and find a trick door that led to a secret room and hallway. More goblins met us on the other side of the door. We got most of them, but a couple escaped down a curvy hallway. As we advance down the hallway that was once filled with the sound of what was perceived to be 15 goblins is now eerily quiet. Pru used her spear to carry a goblin body down the hall that she then set on fire and stuck around the corner, it was immediately hit by 3 arrows. Armidia quickly peaked around the last curve where she sees 15 goblins, 5 in front with shields and 10 above with bows and arrows. Using the corner as cover, Shotey and Armidia were able to take a couple of the bowmen out. We then get into a very scrappy fight with the goblins where we all take a number of hit points and become injured. Some used our second wind, some were healed by Armidia's once a day ability to heal each of us.

Behind the goblins is a room that opens up. We see a few goblins speking through a hole in the wall to the left, and as we come through they flee through the opening which we now recognize as a big boulder blocking a passageway. The room is now deserted and we cautiously approach the opening which is five feet up, so Armidia looks through. See surveys a large lumbering creature about 9 feet tall. She throws a Molotov cocktail through which the creature shies away from. Pru tries to stone it, but it's thick hide causes the rock to bounce off. We all decided to jump through the opening and engage the Troll in battle. Early on in the skirmish, Gillian take a critical blow from the troll's club and dies. Enraged by her companion's death Pru is able to cut an Achilles tendon, and Armidia cuts the other. After the troll falls, Pru climbs up his back and stabbs it with her dagger in the head, then Armidia landed a critical hit and cut off the troll's head. Behind the dead troll there is an opening out into the night cloaked valley.

As we are all injured and tired we decide we need to head back to town to rest and recover. As we emerge from the cave we encounter a shady bunch of men/beings that do not seem friendly, but do not attack. For part of the way back to town they follow us a distance. We made friends with the wall guards so they'll stop giing us a hard time when we come back to town. We break into the tavern and demands a room to sleep in. Over the next two weeks Armidia learned how to use light of valinor (sp?), Shotey bought a wolf warrior dog that he bonded with and cleverly named Wolfie, while this was happening Pru was making friends at the local tavern and hired a new human companion. I think Elidon was getting it on with Ent Moon the Green the whole time and Ezria was trying to find a wife. Before leaving the town, we decide to buy a chest with a lock on it and place most of our valuables locked in side and place it in the room  we pre pay for a month. We also visit the shops to buy supplies like oil and slings and spears that were damaged or used up.

We head back to the caves after saying our goodbyes to the wizards. We keep an eye out for the shady men, and finally come upon them when we decide to explore the small wooded area at the end of the valley. We throw them some money and head into a new cave hoping they will take our peace offering and not pursue us. We notice that the cave is damp and seems to have been created naturally over time by some water source. we take every fork to the left and come upon a gigantic bear that is snarling and vicious and 15ft tall on its hind legs. In this battle Pru is having little effect and keeps out of the way. Shotey, Armidia, Elidon, and Wilborne take down the beast with minimal hits as Wolfie flees the cave. Shotey takes his trophy by turning the bear's claws into fight gloves and Pru skins it and sets it to dry for a bear pelt that we suspect may be worth a full crown.

While the pelt is drying we venture into the closest fork to the right and are overcome by an unfamiliar acrid scent. We come to a pond filled with white fish. As Pru is about to dip her fishing net into the pond the group notices that the water is begging to move and a jellyfish type blob is coming toward them. Before we can retreat Pru's leg is touched and burned by the acid. After getting away down the corridor, Armidia takes a role for her lore knowledge and learns that the blod eats metal and flesh, and it susceptible to stone and wooden weapons. As we walk past the bear cave we grab the pelt, but something doesn't feel right. Armidia perceives that the shady group of beast men are preparing to ambush us outside the mouth of this cave. At the same time, the blob is slowly making it way towards us. The hobbit has dexterity and a a sling with rocks, so she quickly head back toward the blob and hits it several times, weakening it, but it is Armidia with a spear that finally kills the blob.

As we approach the entrance to the cave Pru throws caution to wind and charges out throwing a a Molotov cocktail setting 3 of the 7 men on fire that were waiting to ambush the tribe of adventurers. She and Willborne go after the the two on the left while Elidon and Armidia take the two on the right. Shotey and Wolfie stay back to help whoever gets in trouble. Willborne gets hit, Pru goes after her man with an ax and does some damage. Shotey comes to help Willborne while Armidia and Eldion engaged their counterparts. At one point Armidia turns to assist on the left after she cuts the heads off of the two savages on the right. We notice that the man opposite Willborne has a horn that he's trying to reach for. Armidia immediately focuses her energy on stopping him for fear that the horn has magical powers or that he may call for help. She acquires to horn and adds it to her collection of  trophies while the rest of us finish off the barbarians.

As soon as the last beast man falls we looed up to see a shield wall of 5 more beast men advancing toward us from about 60ft away, with an even more stout looking leader trailing by about 7ft. Pru and Willborne jog out about halfway and try to throw a stone and a spear at the leader. Armidia and Elidon follow and try to hit using either their bows or spears, but neither hit for much damage. The group of men is now upon us; Pru and Willborne are the first to be attacked. Willborne is hit and Pru counters by going under the large men's round shields and critically injuring the 3 men at the right side of the armor shield by slashing their Achilles, stabbing them in the groin, and killing them. She also brings a fourth man to within only 2 hit points. Armidia follows up by beating the men into unconsciousness. We tie the two lowly men up together and the chief seperately while we try to decide if we should execute them or use them for some type of reward or knowledge. Shotey feels strongly that we should at least execute the two men, and proceeds to do so, cementing the trait of cruelty in his heart. We drag the leader back to his horse and slump him, and an unconscious Willborne, over the back of the horse he rode in on before we started to make the trip back to town to recover and see what kind of reward we might get for this warlord. 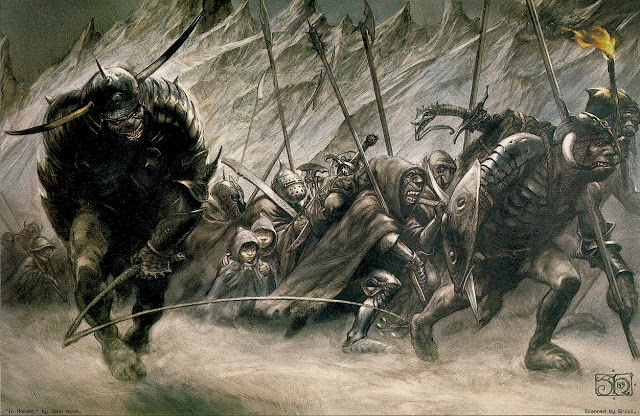 Drearily we head back to town. About half way there we detect a large group of Orcs before they see us. We tie the horse with Wilborne and the chief to a tree that Elidon climbs up into while Pru, Armidia, Shotey, and Wolfie hunker down in the tall grass. We exchange a few arrows and rocks before Armidia and Pru stand and move closer while preparing the last 4 bottles of oil at hand for Molotov cocktails. We throw the first two and kill 5 of the Orcs but begin to come under major fire. Pru is it hit hard and falls to the ground injured and unconscious  Shotey jumps out from the grass to throw another of our makeshift bombs. This bombs is less successful, but Armidia manages to kill a few orcs with her bow before she too is injured to the point of unconsciousness. Shotey does little more before he is also overwhelmed by the forces coming at us....
No comments: