Good lord, I'm the worst. Have not updated the campaign recaps since May. My excuse is that I moved cities and jobs, but it's really I could have carved out a few minutes. These posts are good for thinking about 'next adventures' with the group, anyway, so I really should keep up with them. These are very handy in remember stray plot threads and generally in prepping adventures, so it'd be for my own good too. Here we go: 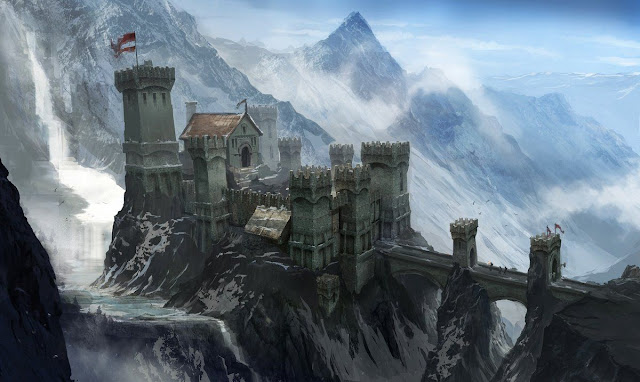 In the last recap, we ended with the party reaching Dragonsbridge, a castle guarding the lone pass through the mountains from Gisoreaux to Couronne. The group made some plans with a creepy hedge wizard named Ferregus to obtain a key to a sealed cave beneath the castle where a dragon was reportedly entombed. Initially, the group was going to sneak in, but Onfroy, drunk, picked a duel with one of the gate guards with some critical successes on Entertain (Taunt) rolls. We rolled with it, and Onfroy not only killed the guard but began wrecking mayhem in the castle yard. Things went south when the overall garrison was roused, and Boneshard and Onfroy were captured after the gates were shut and several knights pinned them down. Regis managed to disguise himself as a regular guard (who he had killed) in true spy fashion, and was able to move about the castle. He steals the key from the lord's chambers, while Onfroy manages to disarm the castle torturer in the dungeons and protest to the lord that he was undertaking an honorable duel (with some good rolling and judicious expenditure of fortune too). DM's note: the lord agreed to release him because he thought he could spy on Onfroy and find out the mutant's other accomplices, perhaps able to blackmail some noble rivals with a confession from Onfroy or the mutant. But he wanted to know where the group came from. Unfortunately for the lord, these plans unravel as Onfroy uncovered the spy, Regis supplied Ferregus with the key to the dragon's chamber through Ferregus's accomplice, the 'washer woman' Mathilde, and all hell broke lose when the dragon breaks free while Onfroy and Regis are making their escape with stolen horses and more convincing lies from Regis.

After a brief sojourn away from the castle, and seeing that a dragon has wrecked havoc on it before flying off into the mountains, Regis and Onfroy returned to save Boneshard. More hire-wire combat ensues and they manage to capture the Lord Drakemont in the chaos and his son and wife. There is a negotiation with the garrison commander, and the group is allowed to leave in exchange for no harm befalling the Lord's family.

The group then spends several days on horseback in the windy, cold, snowing, starving mountains. They are attacked by orcs and a strange horse-monster before coming upon an Ogress, Okra, who had been working as a smith for the orcs before the warboss cast her out for eating too much of their foods. The group smashes up some orcs together before finally reaching site of the nearest town in the mountains' foothills, Souen. A halfling n'er'do'well Twiggett was in town and learned that three knights sworn to the king to find the chaos warrior (Boneshard, though they did not know his name) had hired a ranger guide through the mountains. The knights soon find Onfroy, Boneshard, Regis, and Okra on the mountain trails and battle ensues. In a striking moment, Boneshard is slain as a questing knight, Sir Bourchard de Montcalm, rammed his sword to the hilt through Boneshard's heart (in game terms, he was criticalled, rolled a 99 or 100 result to the body, and had no permanent Fate points left to avert). Okra then smashed the knight's skull in with her warhammer. While the questing knights were soon defeated through Okra's and Onfroy's prowess, Boneshard was dead---a blessing in disguise as now Regis, as the party's face, could disclaim that they were associated with the chaos warrior and mutant.

Souen
An amethyst wizard from the Empire, Willem of Nye (Boneshard's player's new character) was also traveling in Souen, following the tales of Boneshard's demonic sword that he had obtained some ancient stories on. The lord of Souen, Alaric, shamed by his marshal Sir Godefroy into riding out  to confront the chaos warrior, summoned his men-at-arms to ride out. The wizard, a foreign notable, was allowed to accompany them as a dignitary (ah, the class solidarity of the elite!). Godefroy approached the wizard secretly offering him a stack of gold, like 30 crowns, to kill Alaric. Gossip gathered by Twiggett revealed this was because Godefroy sought to marry Alaric's daughter and gain his lands, but Godefroy refused, seeking a better alliance for his daughter. Willem agreed but then crossed Godefroy by casting a sleep spell on him as he sought to provoke a fight against the party, who Lord Alaric had begun to negotiate with. Regis sold the lie that they were mercenaries who had helped the knights kill Boneshard, and they were welcomed to camp in Souen. Alaric, though, realized what Godefroy had attempted to do, and so enlisted Regis to have him killed in a duel - he could not kill Godefroy openly himself, as Godefroy, a younger and martial man, had the respect of his household knights and troops. After insulting him profusely at dinner, Onfroy quickly slew the man (a lucky critical that slashed apart Godefroy's arm). Alaric then invited them to leave, with a bag of gold as a reward (20 GC i think?). 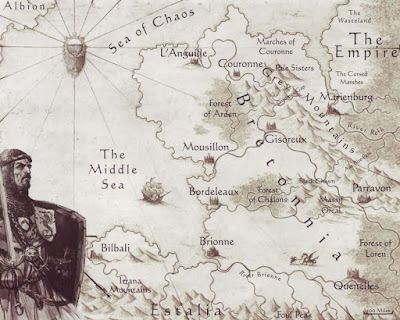 Outside Souen, the companions were greeted by their old patron, Lady Griselda, first in raven-form and then skyclad. She reached an agreement with Regis for them to resume their Olde Quest: kill Lord Agravaine, now Duke in the south. She offered to purchase them passage on a ship she hired in L'Anguille for the purpose, and they would take the group south where they were to figure out some way to kill the Duke.

The companions then traveled west, trying to avoid settlements. They were thwarted when hunting deer for Okra to eat, as several hunting knights found Regis 'poaching' as he stood over a freshly killed deer. A typical combat followed, with the knights' entourage of footsoldiers scattered and fleeing after some bloody work by the ogre and fencing-masters. Now equipped with fresh meat, but forced to hide from any settlement whatsoever, the party promptly wandered into a town to obtain a boat to travel to L'Anguille on river. A new companion, Stomply the ornery dwarf, tired of negotiations with the boat's owner and sons, killing them and they attempted to row and steer the boat out of town as footmen caught wind of the party's presence and sought to stop them. Through some luck and Okra the Ogre's well-placed anvil throw, the pursuing ship of men-at-arms was sunk. They group then got the vessel stuck several times and abandoned it to continue to L'Anguille on foot.

Finally in L'Anguille, the party, now 6 strong with an ogre, managed to not kill everyone and sailed away on the Swan Maiden, south to find fell Duke Agravaine.