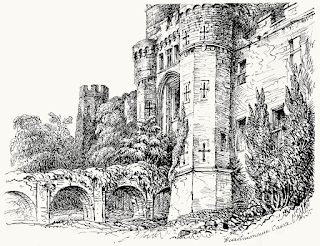 After a hiatus of a few painful months from rolling dice (summer busyness), managed to start an AD&D game (with house rules) on discord with some friends. Hopefully my dream of an open table ongoing characters game can work out, and early signs are it will. I grabbed beyond fomalhaut’s wonderful Castle Xyntillan and made my own large Goblin Mountain dungeon. Offered the players a choice (in game explanation of what the dungeons would be like, haunted evil noble castle or hunt for goblin ears). They chose Castle Xyntillan, and off we went. Following Gabor Lux’s ideas, starting everyone at 4000 xp, which is 3rd for all but wizards.
Characters
Dame Euphonyria, cleric of the Three (noble/gentry background)
Barthelemi (Bart), human fighter (peasant background)
Hvolofghovrox, gnome ranger (allowed because player is good and fun, and it wasn’t just some stat-min/max)
Adventure highlights
• fought the flocks of ravens watching the ruined gatehouse
• made it into inner courtyard, where gnome exchanged riddles with the Ape-Lizard statue and cleric became geased to bring the head of one of the Stygouos bird-demons for him
• started exploring the kitchens where 5 ghouls almost killed everyone and badly hurt Euphrynia
• retreated back to town (Tours) after recovering fine silverware in the kitchens
Rewards
• 750 xp each between a pile of fine silverware recovered in the kitchens and monster killing
• roughly 520 sp each for the value of the silverware and assorted coin found on bodies
DM notes and lessons learned
• monster xp is HD (plus 1 for each powerful ability) squared times 10 xp; gold for xp at 1 sp to 1 xp (so 10 for each gold). This is to control inflation and speed up advancement when we’re only playing like 1x/week for 2 hours (instead of old days; see more at All the Dead Generations).
• the critical hits chart was too powerful and did not work for me; I’ll be going back to critical hits = max damage +1. May keep the fumbles chart.
• preparation for next time is to create a village base more to my liking, the Tours that comes with Castle Xyntillan is not the sort of place I like to run (also too many wizards there).