Rediscovering my love for Advanced Dungeons & Dragons: a review of second edition

So like many, especially fellow children of the '80s/90s, my first rpg was Advanced Dungeons & Dragons Second Edition (2e). My wife also particularly likes these rules, as she has put many hours into the Baldur's Gate series. Recently, I rediscovered about how awesome the rules are even in comparison to the current gold standard of OSR rules - B/X (basic/expert) Rules Cyclopedia D&D. One reason too was acquiring from half-price books a printed 2e player's handbook (I apparently lost/sold my original childhood one). 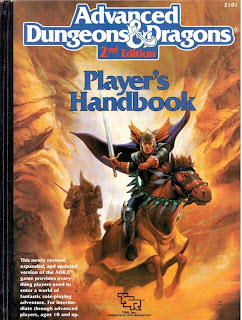 Having re-read the book and thought about the rules, some advantages of second edition over other D&D (even B/X!) and in some regards (proficiencies, fighter rules, spells) first edition:


Beyond the specifics, generally what appeals to me about 2e is that everything is very thematic and it shows the DM a roadmap for making the rules fit their own particular setting. Want to run an ancient greece game? Swap out this and that, deny certain classes and races, use the bronze plate rules but drop regular platemail, etc. Want your magic-users to only have illusion and divination spells? You're ready to go because all the spells are divided into schools. The core classes like Fighter and Priest fit many settings because their abilities are so straight forward (extra good at weapon attacks, being restricted to particualr deity's spheres of influence). And its faster than needing to come up with all the customized rules for your setting, because 2e's rules are such a grab bag of goodies.

That said, of course there are some major flaws, especially in light of the way we've all being playing D&D in the many years since this was published.

All in all, I highly recommend giving second edition another look. It overall is not more complicated than B/X but has alot more options and food for thought. So if you're like me and find it easier to pick and choose from a menu of rules and ability options rather than create them from a skeletal baseline, get yourself a copy and start playing AD&D again.