Warhammer system thoughts: Efficiency in Presenting Information, Or, How to Speed Up and Simplify Combat

[for those that haven't heard, Old World Warhammer the wargame is back ... or it will be sometime in the next few years.]

An excellent post over at the Alexandrian about how the exchange of information about rolls between players and the GM affects the flow, enjoyment, and feeling of complexity in an RPG.

Besides being a well-written post in itself, it got me to thinking about applying it to WFRP. I've seen several people criticize the new edition on forums or the subreddit for being complex, especially the new way of doing combat where hitting and damage are the same roll. But I haven't found the system to be particularly complex, especially on the player-facing side. (Obviously, it's way more complex than basic D&D but probably about the same complexity as fifth edition.) I think two things are going on here. One, the efficiency of the exchange of information as per the Alexandrian article. Two, differences in assumptions between the older editions or D&D and the new edition.

The latter issue is tough to tackle, and it really requires a 'close reading' of the rules to combat or time spent watching other people play the game. I noticed in the Mud & Blood podcast, the players and GM had ALOT of trouble with the new way of doing combat because they were mixing up the old rules and had decided to use a 'quick method' of calculating success levels that they kept forgetting they were using. Play the game more, and make rulings until you look it up in the current rulebook, I say.

The issue of information exchange, the former issue, is an interesting one though. I like Alexandrian's point about the different exchanges that happen when firstintroducing the game versus the players gaining some familiarity so that if you tell them the enemy's AC, they can perform certain calculations themselves and have a more efficient (and fast and fun) info exchange. Thinking about this for WFRP is instructive, because if the new combat system's information exchange could be streamlined this would speed up the game immensely and should eliminate the "complexity" complaint I've heard.

So first, before the players know what's going on, I think you have to stick with the uber-simple but more time consuming exchange of asking for success and then helping them calculate SLs. Like so:


Soon, the PCs should be able to make this go much faster:
This is less complicated than the usual rpg way of next requiring a damage roll because there's fewer tasks involved. Additionally, the WFRP d100 system if fairly intuitive and shouldn't be too hard to remember three things: (i) roll under whatever your skill is, (ii) each tens digit under your skill you roll adds 1 success, (iii) doubles (33, 22, 66) are critical hits or fumbles. But there's a couple of twists in the new edition for most combat. 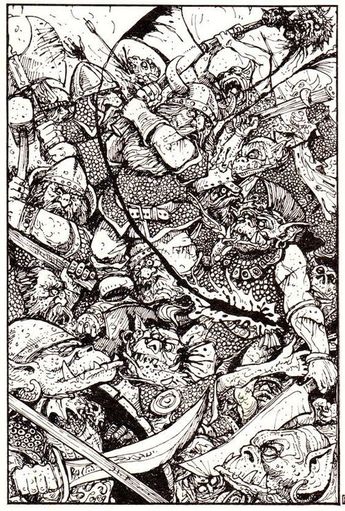 Advantage
Current WFRP adds the advantage mechanic (as as has been said before, should be Initiative or Momentum) where each prior successful roll adds +10% (effectively 1 SLs) to later rolls, accumulating infinitely until the character is wounded. Most, including I, soon capped this (6 advantage for me). This is relatively easy and straightforward to add though, and doesn't matter if the GM or the player is tracking it:
Better, though not strictly necessary since it's a fairly mundane calculation, is to make the PCs track their own advanatage. So the GM just says roll, and the PC can calculate his successes. After all, the GM is tracking the NPCs advantage, so the less stats in his mind the faster the game.

The Hard Part
The other twist is that in WFRP, to eliminate the former 'whiff' of missing a lot (which still sucks in low-level D&D), is in melee, you count relative successes to hit and parry. So if I hit by 1 and you fail your parry/dodge by 2 SLs, I add 3 to damage. Currently, I think a lot of GMs and groups are making the GM only do this math. This is inefficient, like the example in D&D of never telling the PCs what the AC of the enemy is and then rolling their damage for them. Too much calculation by one player of the game:
Doesn't look that bad on paper, but in play, it's much slower. And can be slower than requiring another input in the form of a damage roll. So what to do? Make the PC calculate the total damage.
This is much faster and feels less complex than the other way of not having the player calculate that. Even faster, in big combats (the relative brain-space or mental math isn't that bad for a 1:1 or 1.5:1 PCs type ratio) is to, like the DM who gives the monsters' ACs to speed play, give the enemies' Toughness + Armor. Then the GM is only recording reduced wounds. Very fast, and 1 dice roll on each side is quickly resolving things.
This is much better than players bored, waiting for the GM to do calculations and slowing down the combat. The trick is, your players need to practice and the GM needs to train/help.

For awhile, doing the first iteration of simply knowing how to calculate SLs, recognize critical hits, and see how much damage their weapon does is great. Play several hours this way. But generally, roleplayers (i.e. people over age 10-11) can handle the addition (bah dum!) of knowing how to calculate their own damage by adding both (i) the advantage modifier and (ii) modifying their SLs. This is very similar to the D&D player trick of rolling your d20 to hit and weapon damage die at the same time, so you can instantly tell the DM everything once you know the Monster's AC. Except in current WFRP, that AC knowledge is basically how many SLs the enemy has. And, in WFRP it's far more important this happen than D&D players rolling both dice at the same time.

Telling your players their enemies' toughness+armor should speed this up even more. And gives the GM more mental space for bigger combats, using various weapon rules, and so on. Generally too, players can figure this out very fast and you should be singing along.

My 2 cents, inspired by a great one from the Alexandrian.